The following is one of the five fundamental principles which can help you to write a better, cleaner, and maintainable code. These principles were introduced by “Uncle” Bob C. Martin and the acronym “S.O.L.I.D.” was introduced by Michael Fathers. The original main source of the information can be found on the personal blog of Uncle Bob.

First, I would do a general overview and later I will be going into the small details.

“A class should have only a single responsibility… There should never be more than one reason for a class to change”… what does that means? This mean two separate things:

Why? The first reason is maintenance. Since each class only concentrates on one responsibility, it will be easier to maintain them plus they will be smaller on size. The second reason is re-usability. In this case, we could have a different hardware than a modem, lets say Bluetooth, and don’t need to rewrite again the communication protocol.

If out of the blue, you have more than one type of communication protocol (TCP, UDP, etc.) then perhaps you want to separate this class into small classes in which each class takes care of one type of protocol. 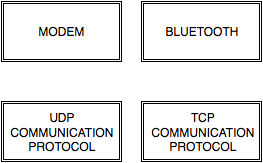 By now, you must be getting the idea.

Step 1: Write a test case first.
Step 2: Write the minimum code to pass that test case.
Step 3: Restructure your existing code without changing its external behavior.
Step 4: Go to Step 1 and apply all steps with the next feature.

So, if you write test cases for small classes that have a single responsibility, your classes will become solid blocks that you can use while knowing that they pass all the tests you designed before.

The Model-View-Controller is a framework in which you separate user interface (View), from the business logic (Controller) and the data (Model). In this way, you should be able to reuse these components and make a better and cleaner code. However, I found out that what is being called a controller is actually being used as a “View Controller” which holds business logic and controls the view behavior. This can become a huge mess. Therefore, I would advice that you keep the business logic separated from the view and the follow is an example:

In this way, the view takes care of the interaction with the user, the view controller, takes cares of any changes that must be done to the view, the controller is the business logic, and the model is the data. This should follow the idea of Single Responsibility Principle and allow for an easier application of Test-Driven Development.